There are lots of things to update you on soon — anthologies and stories and essays and writing groups and conferences, oh my! 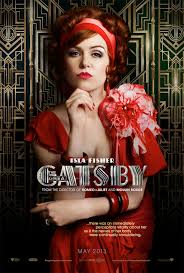 But instead, I want to tell you about the (swell of orchestral music) *Movies*! The lovely Wendy Russ offered me a chance to review the movie reboot of one of my least favorite books, The Great Gatsby and I jumped at the chance. I’d been anxious to see the movie because I thought the lush, lurid world illustrated by Fitzgerald would lend itself well to the screen and who better to aggregate such grandeur than Baz Luhrmann. In preparation, Adam and I both picked up the book again. We went to the fancy theater to get the best crowd reactions and then had dive Mexican food and recounted everything we loved and hated. The fruit of that labor can be read here. Join our discussion, please — there, here, or on social media.